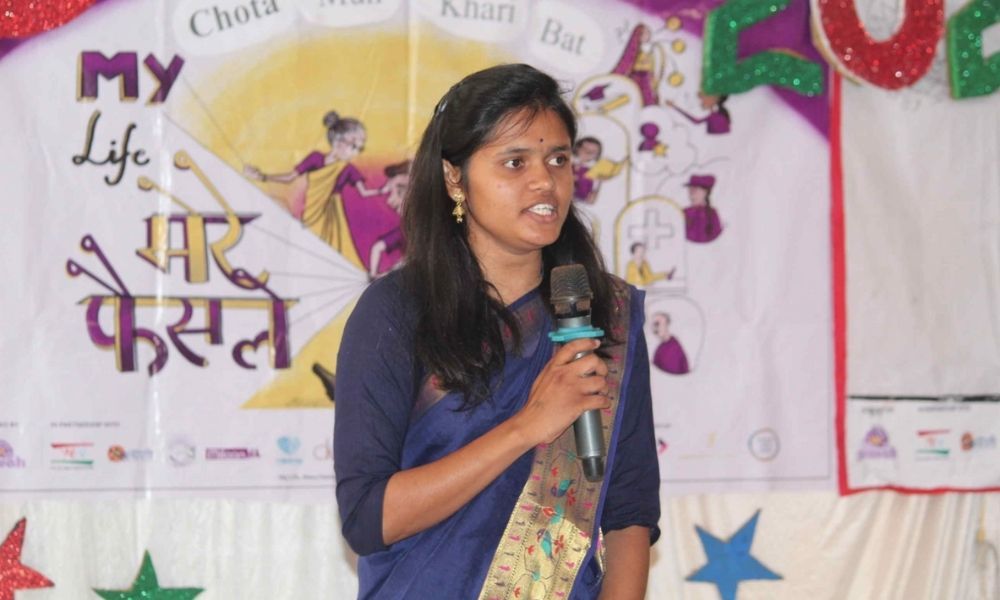 Madhya Pradesh: This 23-Year-Old Is Guiding Youth in Her Community To Be Agents Of Change

Kritika Narula is a writer, journalist and communications consultant based in Delhi

It’s only been 6 months since but she can already see that the girls attending the sessions have taken these conversations to external spaces.

The Sindhkheda village in district Harda of Madhya Pradesh is a close-knit community. It is economically firm. While there is an emphasis on the importance of schooling and education, gendered norms dictate access to education.

"The narrative that boys can do anything, whether in the sphere of education or jobs; is very strong. For girls, on the other hand, marriage is considered a greater priority. Education is only a secondary and complementary goal when it comes to girls," 23- year- old Neha Unhale shares.

"By contrast, my family consisting of my parents, grandparents and brother — is relatively progressive and supportive of my endeavours. They never question my educational choices or prevent me from befriending boys, which is something that otherwise raises eyebrows in the community."

This is why, in a community where education for girls is still a privilege, Neha has managed to secure two degrees: Bachelors in Social Work from Devi Ahilya University, Indore followed by a Bachelor of Education from the same institution.

Her knack for learning and education finds its roots in her time in high school. As a part of a volunteering opportunity, she visited little kids in the village who lived away from the rest of the community. This was a one-of-a-kind experience for her when for the first time she was left with a lot of questions, especially about the geographical and social ostracization of the lower castes, in accordance with the social stratification structure of the caste system.

Neha has a solutions-oriented mindset. As she dug deeper into these questions, she also concluded that education can actually be the ticket to empowerment for the marginalized and oppressed. In her own words, "Education, in my mind, was the thing that would help them. It would alleviate their economic and social troubles, and elevate their life."

In real life, however, earning equal respect and the success that one deserves is often isn't as simple as securing an educational degree, more so for people who do not hail from the privileged social strata. This is something Neha learned as she started working with Synergy Foundation as an intern and then as a Youth Fellow under the Meri Life, Mere Faisle (MLMF) program. This was the first time she was directly engaging in conversations with the youth.

When a person works at the grass-root level, the understanding of context — and the ability to tailor conversations and semantics to this context — proves to be an extremely useful skill. Neha had a good head start in this regard. During the MLMF program, she worked with the young people in her village to spark conversations on Youth Rights and Duties by co-creating a safe space where the young have agency, learn about decision making and inculcate inclusive leadership skills to transform society.

The Youth Duties and Rights Draft Declaration crowd-created by the vartaLeap coalition has helped many young people like Neha to initiate and hold such powerful spaces for their peers. They have been able to come up with collaborative practices through intergenerational dialogues that empower young people to thrive and lead sustainable change in their own communities and thereby contribute to nation-building.

To engage her peers in the sessions, Neha picks up cues from the local context, like talking about the village Panchayat in order to ignite a larger discussion on politics. Or talking about caste, in order to address the discrimination within their communities.

What impact do these discussions have?

"For a lot of these young people attending the sessions, it's the first time that they've been given a chance to speak up and contribute their opinions in a discussion concerning them. They are able to express themselves in a safe space and feel heard. We ensure that they are able to put forth their own thoughts and perspectives, as eccentric as they might be sometimes, and we make it clear that all ideas are welcome without judgement," Neha shares.

Palpable change doesn't happen overnight, and it's only been 6 months since she started taking these sessions, but she can already see that the girls attending the sessions have taken these conversations to external spaces as well.

"One of the girls who attended the program now reaches out to me outside of the sessions too, and informs me of issues in the community that she feels should be addressed." It wouldn't be wrong to say that through these discussions, Neha is honing the vanguards of a more just and equitable society where young people are co-creating change as equals!

Her takeaway is, "We talk about wanting to change the world, the society, but change begins with the first step. It begins with changing ourselves. Young people are at the forefront of this change."